Note: Books are listed from most recent to oldest. All books are stand-alone love stories. Some characters make appearances in other books. *To maximize enjoyment and to avoid potential spoilers regarding couples, you may want to read them in order.

**All books in this series has a few mildly steamy scenes.

(Final book in the series.)

For a man passionate about life and at the reins of his dream culinary career, Frenchman Jacques Masson is searching for that missing piece that will make everything fall into place.

Little does he know that the missing piece comes in the form of a single touch from the vibrant Hawaiian dancer Layla Kalani. Using her artform, she weaves stories of her homeland and tales of love and seduction.

Their connection is instant; with a depth like the ocean and a bond that feels like kismet. But Layla’s parents have already promised her hand in marriage to her childhood friend. Layla draws strength from her rich heritage, at the expense of her own independence. Is her call to duty stronger than her desire for love?

How far is Jacques willing to go for the woman of his dreams? 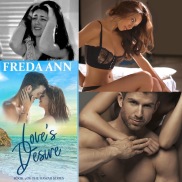 Hearing voices, Jacques turned to the stage where two women were standing at the top of the steps. It’s her. Excitement rushed through him seeing the stunning dancer who captivated him.

She was talking to another woman. They spoke softly but he heard her friend mutter, “There was some serious heat going on between you and the dark-haired guy at the head table. I’ve never seen you look at a man that way.”

The beauty tousled her hair and shrugged a shoulder while putting her foot on the first step, losing her balance in the process. Without thought, Jacques rushed to the steps just in time.

He reached out as she fell into his arms, their eyes locked together—but no words were spoken. He scanned her face as she bit the inside of her bottom lip.

“What the—” One of the male dancers was staring at him with a clenched jaw.

When the woman glanced up at Jacques again, she smiled, murmuring, “Thank you”. Their eyes remain locked together for what feels like forever before Jacques helped her stand upright. She lifted herself to her feet and walked up to the surly man glaring at Jacques, forcing him to turn away.

Faith Roche had no luck with men. Still reeling from a breakup with a man she thought was her future, she has little hope of finding Mr. Right.

Stephen Raine has finally landed the lead role in a major motion picture and vowed that nothing would ruin his big break, especially his conniving ex-girlfriend.

As their worlds collide in the most unlikely place, he is drawn to the French beauty. She is a refreshing change from the Hollywood type he’s dated too many times.

When Stephen’s past rears its ugly head, it not only jeopardizes his chances with Faith, but puts her in harm’s way, leaving him to make a decision.

Will he risk his coveted lead role to save Faith?

Glancing around, Faith got a feeling someone was watching her. Turning to the left, she was drawn to a pair of gorgeous hazel eyes looking at her. A flirtatious smile from the hot guy possessing them made her blush.

His mouth curled as if on the edge of laughter. He looked familiar. He had kind eyes, and even in a crowd, his presence was compelling.

Faith was instantly drawn to him and his infectious smile. He was the type of man she’d only read about in books and magazines. Guys like him didn’t exist, at least not in her life. She snickered when he abruptly looked away as though he’d been caught doing something he shouldn’t have.

Faith examined his profile—he was sharp and confident, two things she liked in a man. She gasped and her eyes grew when she realized who he was.

Mindy looked up from her menu. “What’d I miss?”

Faith wrinkled her forehead and looked at the man. He was talking to the chef from dinner last night. Mindy’s gaze followed hers as the guys turned around, smiled, and nodded at them.

Faith put her hand to her mouth and whispered, “That’s the guy with the killer smile you wanted me to strip for.”

Mindy Shane has it all—a loving family, a blooming business and the best friend a girl could ever ask for, but beneath the surface lurks a wound from a past relationship that never fully healed. When she wins her dream vacation to Hawaii, she plans on putting the past behind her.

Movie producer Brandon Wild lives a complicated life. He needs an escape from the fast-paced L.A. scene, his manipulative movie star ex, and his controlling father—and Hawaii is just the place for him to leave it all behind.

But the moment Mindy walks out of his dreams and straight into his life, he knows this vacation just became the chance of a lifetime to win over the woman he never realized he needed.

The only thing is—Mindy leaves in a week’s time. Flung together in a whirlwind of passion, they come under fire when both their exes come calling, and worst of all, Brandon’s meddling father forbids this budding romance.

Will Brandon and Mindy have what it takes to weather the storm to a lifetime of happiness? 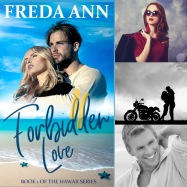 They cuddled like two halves of a whole, fitting perfectly together. He sent her heart spiraling out of control. Mindy knew it wouldn’t last. Her past was evidence of that.

But she had to give him a chance, right? A chance to be the man she wanted and needed. Feeling confident, she called his cell phone but wasn’t prepared for what she heard. It replayed over and over in her head. His ex-girlfriend getting up close and personal with him. How could Mindy be so stupid?